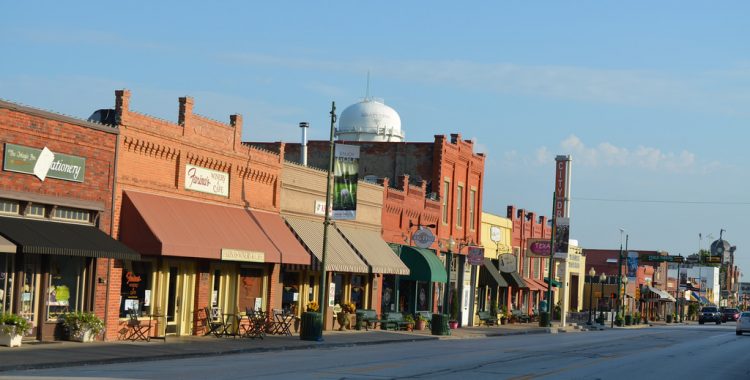 Grapevine is a city in northeast Tarrant County, Texas, United States located within the Dallas-Fort Worth metropolitan area. As of the 2010 census the city population was 46,334. The city’s moniker is derived from the native grapes prevalent in the area. In recent years several wineries have opened in Grapevine, and the city has been very active in maintaining its historic downtown corridor. The city is adjacent to Grapevine Lake, a large reservoir impounded by the Army Corps of Engineers in 1952 and serves as both a source of water and recreational area. Part of Dallas/Fort Worth International Airport is located within Grapevine city limits, the largest portion of any municipality bordering the facility. In 2007 CNNMoney.com rated Grapevine as one of “America’s Best Places to Live.”

In October 1843, General Sam Houston and fellow Republic of Texas Commissioners camped at Tah-Wah-Karro Creek, also known as Grape Vine Springs, to meet with leaders of 10 Indian nations.This meeting culminated in the signing of a treaty of “peace, friendship, and commerce,” which opened the area for homesteaders. The settlement that emerged was named Grape Vine due to its location on the appropriately-named Grape Vine Prairie near Grape Vine Springs, both names an homage to the wild grapes that grew in the area.

The first recorded white settlement in what would become the modern city occurred in the late 1840s and early 1850s. General Richard Montgomery Gano owned property near Grape Vine and helped organize the early settlement against Comanche raiding parties before leading his band of volunteers to battle in the American Civil War. Growth during the 19th century was slow but steady; by 1890 roughly 800 residents called Grapevine home, supported by such amenities as a newspaper, a public school, several cotton gins, a post office and railroad service. The settlement made continued gains early in the 20th century, and on January 12, 1914, the post office altered the town’s name to one word, Grapevine. On Easter Sunday, April 1, 1934, Henry Methvin, an associate of Bonnie Parker and Clyde Barrow, killed two police officers, E.B. Wheeler and H.D. Murphy, during an altercation near Grapevine. A historical marker remains at the intersection of Dove Road and State Highway 114. Points of historical interest nearby include several cabins near Grapevine Lake previously owned by Jack Ruby, the man convicted in the murder of presidential assassin Lee Harvey Oswald.

The population of Grapevine fell during the interwar period as the economy stagnated, though the city was officially incorporated in 1936. Population growth and economic gains resumed to some extent in the decades immediately after the Second World War, though the opening of Dallas-Fort Worth International Airport in 1974 spurred massive development in the area. Prior to the mid-20th century, Grapevine depended heavily upon agricultural production, but quickly transformed into a regional center of commerce because of its proximity to the airport’s north entrance. The economic benefits of the airport’s construction continue to encourage new levels of development in Grapevine to this day.

There were 15,712 households out of which 42.1% had children under the age of 18 living with them, 58.9% were married couples living together, 9.4% had a female householder with no husband present, and 28.0% were non-families. 22.2% of all households were made up of individuals and 3.7% had someone living alone who was 65 years of age or older. The average household size was 2.66 and the average family size was 3.14.

Grapevine’s economy is largely centered around tourism of several varieties. Chiefly, travelers arriving and departing from Dallas/Fort Worth International Airport remain the majority of visits to the city, benefiting the numerous hotels. Among these facilities, the Gaylord Texan and Great Wolf Lodge stand in a separate class as massive entertainment complexes that offer hotel, convention, and performance space in addition to serving the recreational desires of both locals and tourists alike. Nearby Grapevine Mills Mall exists as a regional outlet shopping center with many amenities including an indoor ice rink and movie theater. Many of the top brands in fashion and other retail sectors maintain a space within the mall. Embassy Suites Grapevine and the DFW Lakes Hilton complex also lay adjacent to Grapevine Mills and Bass Pro Shops. In addition to these popular areas, Main Street in historic downtown Grapevine is a center of attraction for many people. City Hall, the Grapevine Convention and Visitor’s Bureau, public library, and recreation center are located on Main Street in addition to a myriad of small business. These include antique stores, restaurants, bars, theaters, a park, and many specialty shops. The Grapevine Vintage Railroad follows a scenic route between Grapevine and the Fort Worth Stockyards, departing from a station located on South Main Street. The city is also the home of several wineries and tasting rooms as well as the Texas Wine and Grape Growers Association.

According to the City’s 2009 Comprehensive Annual Financial Report, the top employers in the city are:

GameStop, a national electronics retailer, is currently headquartered in Grapevine, one of the largest corporate employers in the city.

The facility at 1639 West 23rd Street is located on the property of DFW Airport and in Grapevine. Tenants include China Airlines, Lufthansa Cargo, and the U.S. Fish and Wildlife Service.

Historically, Grapevine was the headquarters of a collection of now-defunct air carriers. In 1978 Braniff Place, the final world headquarters for Braniff International Airways, was built in what is now Grapevine, on the grounds of Dallas/Fort Worth International Airport. Following Braniff’s 1982 bankruptcy, the structure is now known as Verizon Place. In the 1990s Metro Airlines maintained its main offices in the city of Grapevine, as did Kitty Hawk Aircargo for a time.